The Itinerant Printer, Chris Fritton, visited the Printers’ Guild at History Park August 28 and 29 as part of his year-long travels to letterpress print shops throughout the US. His journey is supported by an Indiegogo crowdfunding campaign, and he creates postcards and posters to send to his supporters as he goes from shop to shop.

At History Park he found some rare wood type that had not been identified, but after printing it and posting on Instagram one of his followers quickly identified it as Trafton Script, a 1930s design. He paired it with another rare typeface, Art Gothic, created in 1887, which the Printers’ Guild has in four sizes, to create a unique postcard that reflects the typographic resources from the print shop at History Park.

Visitors to the park were able to pull their own print of the card. Later in the day Chris gave a short talk about his journey and how it ties in to the history of tramp printers who travelled from city to city in past decades. He also discussed his artistic approach to using type, ornaments, and dingbats to create unique patterns and effects in his prints. During the reception that followed at the Pasetta House, visitors were able to look through a number of Chris’s cards and posters and learn more about his work and travels, and also browse through the museum exhibit “Slugs, Dingbats & Tramp Printers: Printing in the Santa Clara Valley.”

Click here to receive occasional email news about our events. 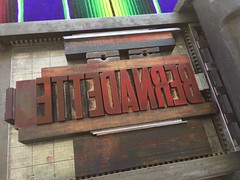 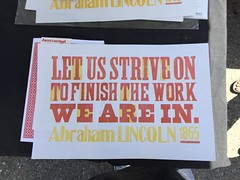 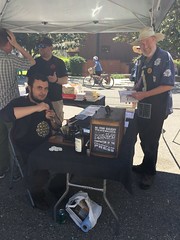 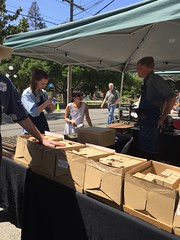